Substantial tracts of land in the county are designated as Special Areas of Conservation (SAC) and Special Protection Areas (SPA) under the EU Habitats Directive and the EU Birds Directive respectively. Together these make up a network of areas known as Natura 2000 Sites.

Within County Durham there are six SAC’s:

There are two SPAs covering parts of the North Pennines and the Durham Coast (parts of the Northumbria Coast and Teesmouth and Cleveland Coast sites). All candidate SACs and SPAs have already been notified as Sites of Special Scientific Interest.

The sections of the Durham coast which are designated as SPAs are also Ramsar sites – wetlands of international importance designated under the Ramsar Convention. 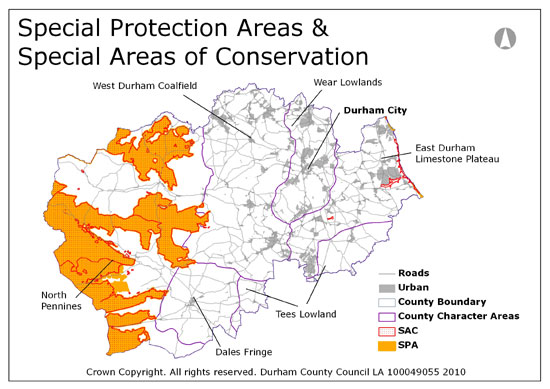